I took the leap and upgraded my backup machine to Yosemite (I know, I know).  Here’s a screenshot of the Freedom 1.0 beta running on 10.10. 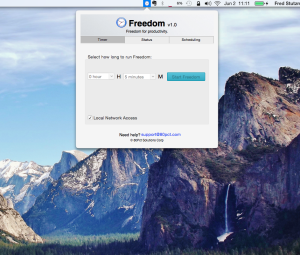 As with all bleeding-edge developer releases, I’m going to reserve opinions until we’re at a .2RC.  The flat-ish UI isn’t offensive (I was an early fan of iOS 7, FWIW), and I have a feeling it is going to look really good on properly scaled retina displays.  I’m quite excited about increased interaction between OS X and iOS; Apple is making strong moves to keep people in the family.  I was just left wondering: why did it take so long?

Eighty Percent Solutions is a Chapel Hill, NC company developing software that helps people be more productive by reducing digital distractions. We're trying to distract you with this blog.
%d bloggers like this: